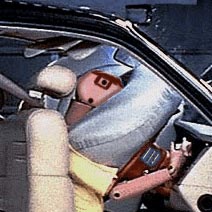 Air bags, when used properly with a seat belt, can save lives. Between 1987 and 2005, the National Highway Traffic Safety Administration (NHTSA), estimated that air bags saved a total of 19,659 lives. Air bags, however, have serious drawbacks. Although touted as a lifesaving device since they were first introduced in the 1970's, air bags have been responsible for numerous fatalities. From 1996 to 2000, 191 people died -116 of those children- and 160,000 adults were injured in cases where the air bag was or was suspected to be the cause.

In many cases, the deaths came in low-speed crashes where the force of the deploying air bags proved fatal. Although engineers assert that the number of lives saved by air bags is far larger than the number of people killed, occupant deaths have caused a backlash against air bags. Manufactures have some blame for the dangers resulting from airbags. After years of stalling to install air bags, manufacturers only decided to introduce air bags to the general public when consumers began to demand for added safety features in vehicles. Manufactures, seeking to commercialize on consumer fears, did not adequately test air bags to determine there affect on occupants of various shapes and sizes located in different positions. Instead, manufactures simply decided to design air bags that met the minimal federal safety requirements even though the federal government encouraged manufacturers to go beyond the minimum requirements and design air bags that would protect occupants of various shapes and sizes located in different positions.

Deaths and injuries from air bags are largely due to the explosive action that takes place during deployment. An air bag deploying is not a serene, light, and fluffy pillow softly emerging to cushion the blow as generally seen on television; rather it is an intense release of energy in a gas filled, nylon coated balloon that detonates at 200 m.p.h. An air bag deployment is almost deafening. The violent eruption of an air bag can throw the driver's hands from the steering wheel and cause injuries, even fractures, to the hands and wrists. If the person comes into contact with the air bag during its deployment, it can cause abrasions to the face. In some cases, drivers have suffered serious chemical burns from the alkaline aerosol gas in the air bag.

The Role of the NHTSA

The NHTSA, under the U.S. Department of Transportation, was established by the Highway Safety Act of 1970 as the successor to the National Highway Safety Bureau to carry out safety programs under the National Traffic and Motor Vehicle Safety Act of 1966 and the Highway Safety Act of 1966. The NHTSA is responsible for reducing deaths, injuries and economic losses resulting from motor vehicle crashes. This is accomplished by setting and enforcing safety performance standards for motor vehicles and motor vehicle equipment. In early 1996, after reports of air bag related deaths, the NHTSA created rules encouraging manufactures to install switches to passenger-side air bags in all types of vehicles for passengers under the age of 12. Although this and other new rules have improved safety standards, an air bag - like any product - may be defective because of improper design or manufacturing. Since 1997, at least 50,000,000 vehicles have been recalled due to air bag related problems.

Concerns involving deaths now appear to have been resolved due to additional federal regulations implemented in 1998 that allow second-generation bags to deploy with less force. The controversy involving air bags today primarily centers on passenger side bags. Virtually all driver-side air bags come with tethers, internal straps that keep air bags-which explode out of dashboards at speeds of up to 200 m.p.h.-from inflating too far into the vehicle compartment. But many passenger-side air bags do not have tethers. It is estimated that 30 million to 40 million vehicles on U.S. roads may have untethered passenger-side air bags. The exact number of automobiles with untethered passenger-side bags is unknown. In fact, Auto companies argue that the exact number doesn't matter because untethered air bags are safe. However, according to a 1992 study by NHTSA titled "Air Bag Deployment Characteristics Final Report," found that $3 tethers "significantly affected" the distance an air bag extends into a vehicle from the dashboard. In 1997, another technical study published by the Society of Automotive Engineers looked at the various kinds of upper torso injuries that occurred when steering-wheel air bags deployed. That study concluded that untethered bags are four times more likely to cause eye injuries than tethered bags.

Despite improvements, children still remain especially at risk, particularly if they are sitting close to the passenger side air bag when it deploys. The bag expands so quickly that it could cause serious harm or even death to a small person. Fatalities involving children have a number of fairly consistent characteristics. First, as to restraint usage, the infants are in rear-facing infant restraints. The older children are generally not using any type of restraint. Second, the crashes in which the infants and older children were fatally injured occurred at relatively low speeds. Third, the fatally injured infants and older children were very close to the dashboard when the air bag deployed. Rear-facing child seats are very close to the dashboard in a crash, even in the absence of pre-impact braking. As to almost all of the older children, the non-use or improper use of safety belts in conjunction with pre-impact braking resulted in the forward movement of the children such that they were very close to the air bag when it deployed. Because of this proximity, the children appear to have sustained fatal head or neck injuries from the deploying passenger air bag. These sorts of injuries may be prevented by promoting driver safety and seat belt use.

Awareness is key, not only in preventing injuries but also protecting your legal rights. Since 1996, when the federal government and manufacturers announced that airbags could be dangerous, victims involved in air bag lawsuits have found it surprisingly difficult to prove manufacturer liability. The reason for this is in part due because juries are less likely to rule in favor of drivers or passengers when they are at fault or negligent because they were not wearing a seat belt or the seat belt was improperly fasten. An example of this trend was evidenced in a 1997 Arizona airbag lawsuit involving a 5 year old front seat passenger (Tarango v. Ford, No. CV 98-00262). The 5 year old passenger was killed when his air bag struck under his chin and pushed his head upward breaking his neck. The eight jurors in the case took only 10 minutes to find that Ford was not negligent because the 5 year old victim was wearing only the waist portion of the seat belt and not the shoulder harness. Cases similar to this is can be difficult to overcome the public's perception that the fault lies with the family for allowing a child to sit in the front without wearing a seat belt. Despite these cases, many confidential settlements involving air bag liability have been reached. Specifically, automakers are less likely to litigate and opt for a settlement when the air bag claim involves a properly victim in a low-speed crash. Circumstances such as these show that the auto industry admits to producing a defective product and failing to adequately warn the public of the danger.

In the event a person is involved in an auto accident and is injured as a result of an air bag deployment, two important steps must be taken. First, preserve the vehicle and have the vehicle inspected by an expert. Second, take photographs of the damaged vehicle and physical injuries sustained. Taking these important precautions in the event of injuries sustained by an air bag ensures that your rights are protected.

In all matters involving products liability it is essential that measures be taken promptly to preserve evidence, investigate the accident in question, and file a lawsuit prior to the deadline imposed by the Statute of Limitations. If you or a loved one is a victim of personal injuries, call The Law Offices of Lennon C. Wright now at (713) 654-7878 or submit a simple Case Review Form. The initial consultation is free of charge, and if we agree to accept your case, we will work on a Contingent Fee basis, which means we get paid for our services only if there is a monetary award or recovery of funds. Don't delay! You may have a valid claim and be entitled to compensation for your injuries, but a lawsuit must be filed before the statute of limitations expires.

The above is not legal advice. That can only come from a qualified attorney who is familiar with all the facts and circumstances of a particular, specific case and the relevant law. See Terms of Use.